For me,  it always comes back to girls. Brilliant, beautiful, powerful adolescent girls – more than 900 million around the world – with the power to create a future for themselves. Girls who are brimming with potential, but due to so many factors, far of out of their control, may never be able to achieve it.

When I joined Standard Chartered Bank in 2008, I was tasked with scaling up the Goal Programme, which took adolescent girls from urban slums in India and used the power of sport and education to give them key life skills. They played with skill and enthusiasm, many having never had the opportunity to run freely outside. They gained knowledge in communication skills, financial literacy, health, and their rights. Most importantly, they began to dream and imagine a future where they had choice and agency to do what they wanted. 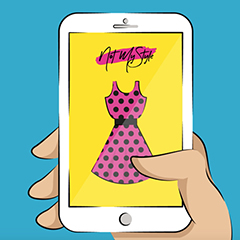 After the collapse of the Rana Plaza factory in Bangladesh in 2011, it was thinking about those girls which inspired me to set up Not My Style, an app that tells shoppers how much their favourite brands share about the women and men who make their clothing products. I’ve always tried – and many times failed – to be a conscious consumer, but when setting this project up back in 2015, I found I wasn’t able to glean even basic information from the high street brands I loved the most: do they have a policy against slavery and child labour? How much do they pay their workers? I found myself frustrated, and so I set up a way to try to reward those brands that were being transparent, and tell those that weren’t that that simply wasn’t good enough.

When we did our first rating of brands, over 25% didn’t share any information at all about their supply chains. Since then, many wide-ranging efforts including the Modern Slavery Act have made it less acceptable for companies to remain silent about their supply chains and the people in it. Gains have been made but there is still much work to be done.

There are really simple things that everyone can do in their lives to help end slavery for victims like the girls I’ve spent time with. The power of your purse is strong, and by being a more inquisitive and conscientious shopper, you can go along way and affect real change:

What do you think? Cancel reply