How can I actually make a difference here? What could I do that would even make a mark? Surely there are way more qualified, capable people to tackle this issue than me?

These were the questions I was confronted with having first become aware of modern slavery through an A21 campaign in Norway, aged 18. Perhaps you’ve asked yourself similar questions and, like me, been overwhelmingly stirred to respond, but simultaneously bewildered at how to help. As if one foot is in the race and the other is stuck in the starting block.

Ending modern slavery is an undeniably huge task. Though certainly not impossible, the burden of this task can seem monumental and overwhelming. There’s a large disparity between awareness and activation, and I believe this is one of the biggest challenges we face – how do we activate people on a wide-scale level to help end slavery? From top levels of leadership to eyes in our community – ending modern slavery requires the participation of many to end the injustices committed by a few. If we are to see an end of modern slavery, we need to address this fundamental gap and create bridges between awareness and activation.

Speaking from my own experience, through the founding of social impact brand, Recognised, I have come to see that the ability to make an impact is far closer and more accessible than we think.

Recognised enables people to support the causes they care about by using great products to connect them with some of the biggest issues faced by humanity, including modern slavery. Recognised lets people use their voice, buying power and social influence to have a meaningful impact on a big issue – allowing them to care, wear and share as part of a wider movement of changemakers.

Motifs with a motive 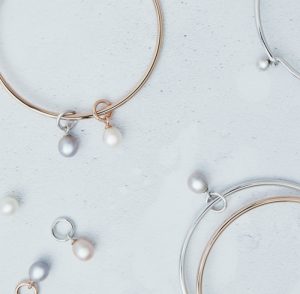 Our model is simple. Our Statement Popons® are motifs with a motive, representing different causes with the simple aim of raising awareness, sparking conversation and prompting action. 100% of the profits from every Statement Popon® is donated to support the work of our incredible charity partners.

We recently launched the Hidden Treasure collection, featuring three Pearl Popons supporting the fight against modern slavery. Every pearl symbolises the precious value of human life, hidden away in darkness and brought into the light. Each purchase is a celebration of the freedom many of us experience, and a poignant reminder of those trapped in modern slavery

Through Recognised, I’ve seen the power of 3 simple actions that anyone can take:

We can and must take action to end modern slavery. No step or action is too small. Let’s all play our part and be the difference.